Turkey can’t be visited without seeing Istanbul, the point where Europe meets Asia and one of the busiest cities in the world. Recently, the worlds largest airport has opened, which provides a great central hub with Istanbul’s central location in the world. This is where I arrived; the huge scale and modern open areas make it a very efficient and pretty easy to navigate airport so before I knew it I was on one of the shuttles to the centre. You will need to buy a travel card from the machines as the buses are all cashless. English isn’t widely spoken in Turkey but you can easily get by with basic conversations, especially in the tourist areas. We stayed at the Ottoman Hotel Park Istanbul on the European side and the host was great, showing us all the tours and information we needed for our stay. We were surprised with our own Turkish bath in the bathroom of our room, a huge range of traditional Turkish and European dishes for breakfast and lots of nice touches including Turkish delight on the bed on arrival! 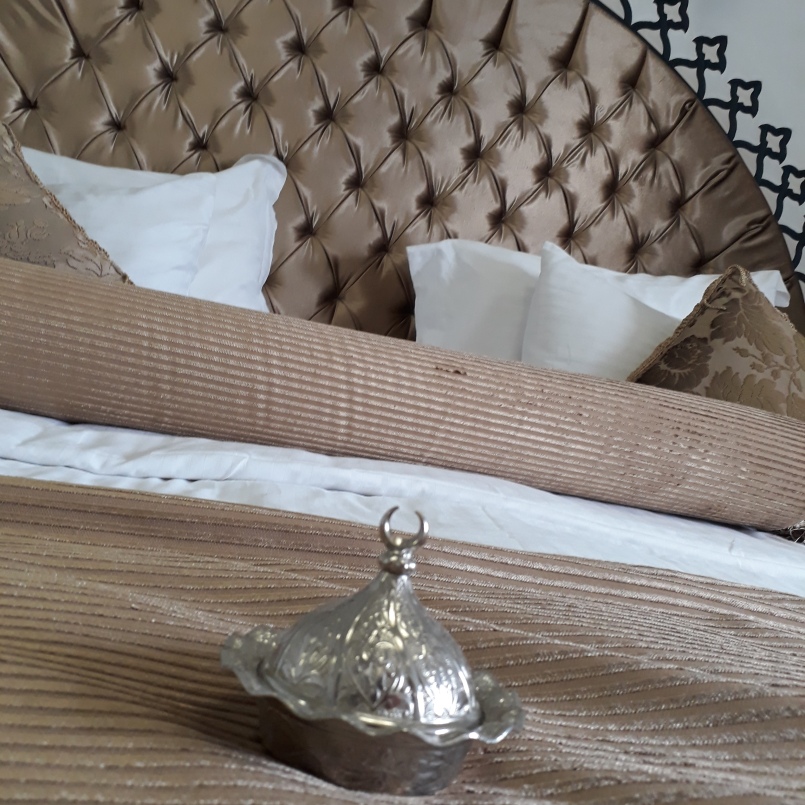 The hotel was close to one of the most populous areas on the European side – Sultan Ahmet Square, this is where we headed for the evening. Two of the icons of Istanbul stand here facing each other – Hagia Sophia (Ayasofya in Turkish) and the Blue Mosque. Currently the mosque is having intensive restoration work so unfortunately only a small section of its famous blue ceiling is in view, though the scale of the mosque and the exterior is still admirable. 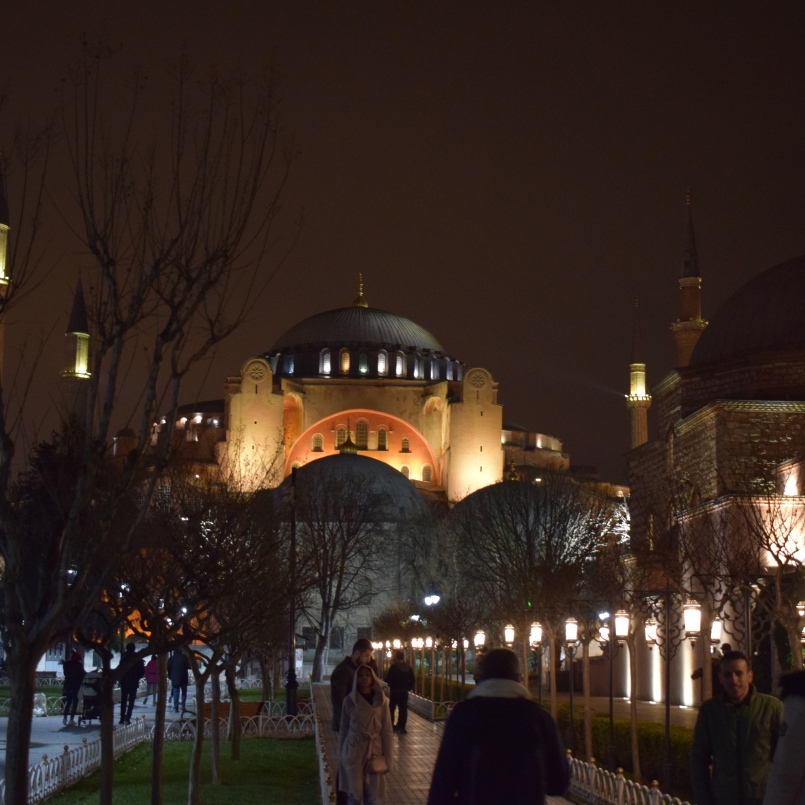 We had dinner at one of the big brand restaurants in Turkey, Mado which is centred between the two towering sights on the main road, reasonable prices for very good quality with a huge range of Turkish desserts to try too! I tried Manti, which is a traditional Turkish dish similar to Ravioli served with tomato paste and yogurt. Then had to get some Baklava as they had literally towers of it in the main window, luring visitors in, couldn’t resist a nice dollop of Turkish ice cream in the middle too! 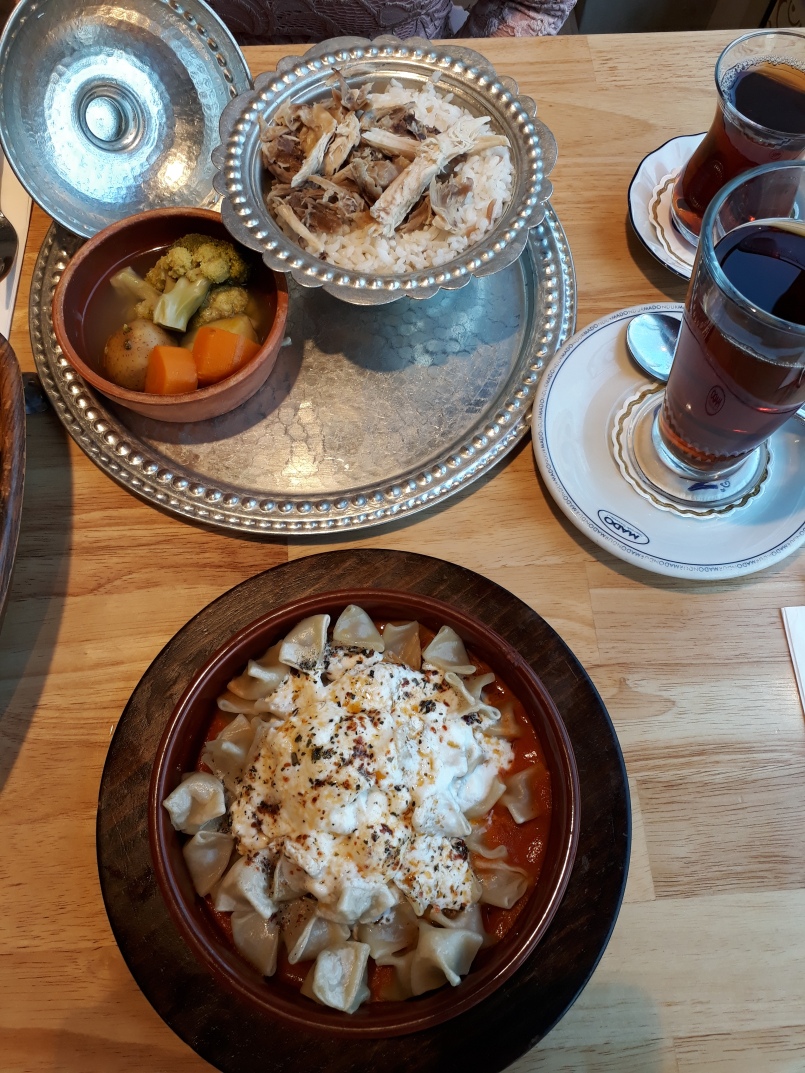 More from my Turkish Travels:

7 thoughts on “Day 1 in Istanbul – First taste of Turkey”

The location for I'm a Celeb 2020, and one of the many castles in North Wales, some of the most complete too. This was so hard to find, I can see why itv chose this destination, it would take some effort to escape from here anyway! A ridiculously bumpy road through a farm and building site brings you to this fairly new attraction, only open to the public since 2018. Lots of work to do still but the castle is just picture perfect and sits proud on its perch looking out to the Irish Sea. Disregard the bad fashion decisions, picking a coat that is the exact colour as my pants really makes me look like I'm a campmate, so all well in the end 🙃😂 🏰🏞️🌲
Hidden on the coast of North Wales is the Italian style village of Portmeirion. Wales actually has the largest Italian community in Britain and here the Welsh coastline and a fusion of Welsh and Italian architecture create one of the most beautiful villages in the world, nevermind the UK!
Thought I'd post some of my huge catalogue of photos, seen as there isn't a lot else to post at the moment apart from the view from my window (which is probably the dullest image anyone has seen btw). Hope everyone is looking forward to the summer, since the announcement my emails and ads have been rammed with events and travel advertisements... So hard not to book them all! I'll leave you with one of the greatest landscapes I've ever visited a short walk from göreme in Cappadocia
The iconic Liver Building and the docks of the mersey ferry in of course Liverpool! Missing these short city breaks at the moment. Fun fact I have a UK map on my wall, and put a blue dot sticker on every new town/city I visit. I haven't touched those stickers for so long but have 63 towns & cities covered up across the UK which ain't bad going i guess.
Christmas shopping is back in full swing. Today was very busy in Leeds, maybe because it was the first weekend shops were open since Lockdown, but for a much quieter shopping experience head to the shops midweek. Despite that, the Christmas songs are playing, procedures are in place to stop overcrowding and there are plenty if bargains to be had!
Hope everyone is finding beauty in their landscapes closer to home!