This visit to Washington DC was part of my bigger trip around the USA, with it being my first time in the states, a visit to the capital was a must, though I had just come from Florida so was unsure what to expect. My home capital is London, so I was expecting something similar with the iconic buildings and world leading museums, plus my this was my first experience of life in ‘northern USA’, here is what I thought:

I landed at Ronald Reagan airport, this was impressive in itself, the grand open concourse area draped with american flags was a great start. I made my way to the budget Americana Hotel located in the Crystal city neighborhood, it took me a while to find a cheap base hotel but close to the attractions of DC but this suited me perfectly, a short walk from the metro, modern mid century style rooms plus free breakfast included. The hotel building is quite old and is showing its age but the room was super clean, very big to say it was just me staying there and had everything you needed. The buffet breakfast was plentiful too, I particularly liked that there was cabinet full of Krispy Kreme’s! US breakfasts always please me though, sweet things and carbs, whats not to like!

I unpacked a few things and visited the nearby Fashion Centre at Pentagon City for some quick food, I grabbed a small philly steak sandwich and topped fries, I found out quickly that small = normal UK size as my large order on the journey was enough to feed at a small family (I do love the range of sizes the US has though!). As I was so close to the Pentagon, I made my way over as it was one of those buildings I just wanted to see in person. Then I caught the metro to the heart of DC for a wander before things started to close. The Metro was very easy to use and the stations were huge, (bear in mind that I am used to London’s cramped underground!). It was just a few stops before I landed at Gallery Place to visit the Smithsonian American Art Museum and National Portrait Gallery. They are located in the same grand building with a large open area in the middle to sit a relax, similar to the British Museum’s concourse area. I love visiting art galleries when I am alone somewhere, being in your own world, admiring and taking in each works is a nice couple of hours of relaxation for me before I continue my sightseeing around the rest of the city. There was a great mix, my particular favourite was the light exhibition below, I don’t know how people come up with these ideas. 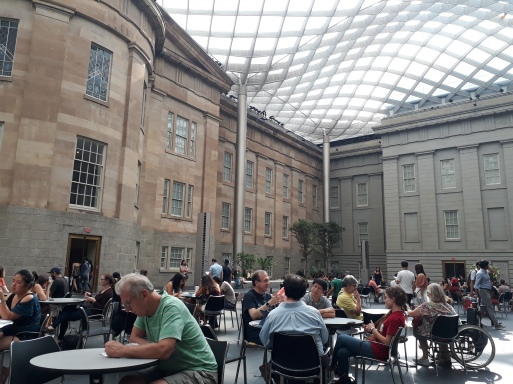 Walking the streets the city had an incredible likeness to certain parts of London with the grand buildings and the open green spaces. Next I made my way to the White House, it is quite surreal to see something in person that you have seen for years on tv and news broadcasts and I was surprised how small it was! When talking with my friends in the UK after, they say the same too, I don’t know what it is about the tv footage but I was expecting something much larger, nonetheless it was great to see such a iconic building where hundreds of historic decisions have been made. I walked the exterior to the National Mall and the Monument and headed west taking in all the various gardens and memorials, I really enjoyed the evening here, both the fountains and atmosphere made for a very peaceful walk. It was great to see the Lincoln memorial get bigger and more impressive as I got closer, plus the pool made for some great reflection photos especially as the sun was just setting. I climbed the stairs to see the statue itself and wow this didn’t disappoint size wise, it is huge!

It was getting late so I decided to call it time for the first day and made my way to the nearest metro station, unluckily for me the direct line back to the hotel was undergoing maintenance so I had to take a lengthy detour around the city but finally I landed and recharged for tomorrows exploration of Washington DC’s Museums.