You may have been to ‘Orlando’, the famous home of some of the best theme parks in the world – Disney World, Universal, I-Drive, SeaWorld…. but have you actually been to Orlando!? By this I mean Orlando Downtown – the city centre, the direct buses from the airport to the theme parks mean many bypass ‘actual Orlando’ and head straight into the theme park bubble. When I was working at Walt Disney World I decided to head into the city and see what it offered for tourists! 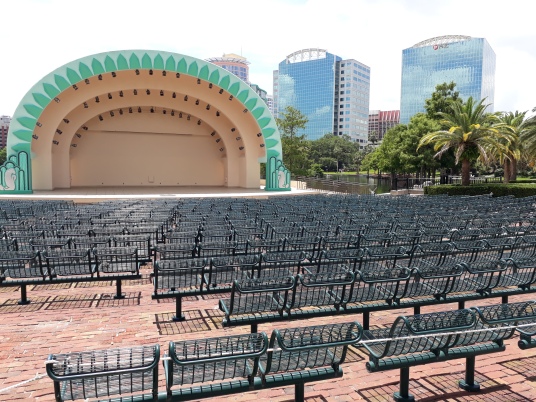 The number 50 bus from Disney takes around an hour to get to the city or if you are staying near SeaWorld on I-Drive, only 30 minutes. We started the morning at Lake Eola Park, the largest green space in downtown and home to the Walt Disney Amphitheatre, a bright permanent theatre space which holds concerts and movie nights right by the lake.  Strolling the park, you get plenty of views of the cities skyline surrounding, you can hire a swan boats for a paddle on the water and there are lots of little gardens and fountains to explore. Of course there were plenty of palm trees reminding us we were still in Florida! We actually spotted some turtles swimming in the small harbour section too.

Wandering into the town, we had a look in the library and found a huge Walt Disney collection which kept me occupied for a while. Back outside we had to take a second look when we spotted 2 alligators lurking on the street! But realising they were sculptures we proceeded into the Orange County Regional History Center. This is the main museum of the Orlando area, there are around 9 exhibits providing a fascinating look into this part of Florida explaining how cattle and citrus fruits once covered the Orange County land, the founding routes of the sunshine state plus more recent history of how tourism and Walt Disney has shaped modern day Orlando. The recreated sets and lots of interactive exhibits made it very fun too, a great way to learn and see a different side to Florida.

The CityArts Factory features a collection of international and local artwork and is totally free from Tuesday to Saturday. Cirque du Soleil’s Crystal show was on tour at the time in Orlando’s huge arena – the Amway Centre and passing the variety of restaurants and nightlife, it looks like the town really comes alive in the evening. I’ve seen photos of Lake Eola park decorated with lights as well as the Dr. Phillips Center for Performing arts which is an amazing place to go for big name musicals and concerts that are featured in its 2,700 seater Walt Disney Theater.

All in all, Orlando’s downtown is worth a visit especially when one of the big productions are in town at one of its awesome theaters. If you have visited Florida and know nothing about its history, then a visit to the Orange County History Centre will ensure you see a different side to the state and appreciate how it has rapidly developed. I wouldn’t spend an entire day away from the parks but a relaxing morning or afternoon with some different scenery is a few hours well spent!

Check out some of my other travels around the USA!

Washington DC – Visiting some of the World’s best museums

Working at Walt Disney World – My experience working at Disney

42 thoughts on “Downtown Orlando – Away from the Theme Parks”