Continuing my travel stories from Turkey, the next stop after the white flowing pools of Pammukale was Konya. One of Turkey’s more conservative cities, it is the home to the tomb of Jelaleddin Rumi. A muslim poet and Sufi thinker who settled in the city in the 12th century. 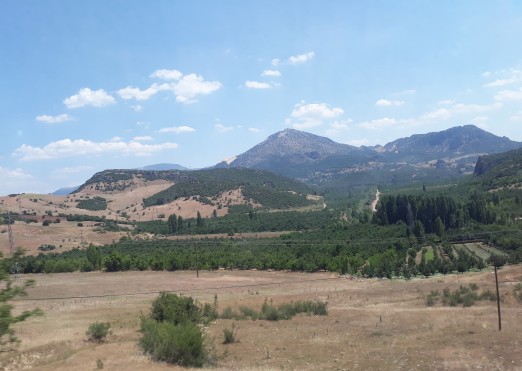 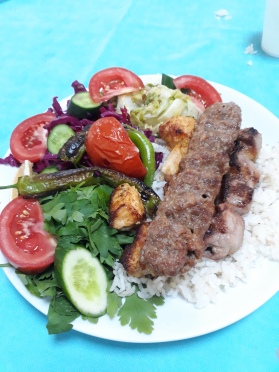 Our journey on the bus passed through central Turkey’s mountainous scenery and the beautiful lake district. Lake Egirdir is a great place to rest or stop if you are taking this route. We didn’t have the time to stop so continued straight through and arrived in Konya in the early evening. We stopped for a delicious kebap feast featuring 3 different types of meat then had a stroll around the city. The towering Selimiye Mosque and the Mevlana Museum are at the end of the main road in Konya connecting the historic mausoleum with the other main sight Alaadin park. I had a look inside Selimiye’s Ottoman style building filled with beautiful mosaics and a huge chandelier filling the room. The Konya sign was perfectly placed for a photo outside the two main sights.

The next morning we returned to enter the Mevlana to see the former lodge of the Whirling Dervishes and the tomb of Rumi whose poetic messages of peace, love of creatures and god are still treasured over 700 years later. Whirling Dervishes are most famous for the Sema ceremony, a spinning routine performed in long white robes, this is actually a type of meditation aimed to achieve oneness with god. You can find the routine in many theatres around Turkey, though this one outside the Mevlana is probably the most authentic performed by actual Sufi Dervishes and is free to watch.

After passing through the beautiful rose gardens, you enter the museum through the silver doors with the inscribing ‘Those who enter here incomplete will come out perfect’. Underneath the turquoise tiled dome is Mevlana’s tomb draped with detailed velvet cloth and on top sits the huge turban, as the more wraps, the higher spiritual importance. In the adjacent Dervish domed cells where students of the Mevlana order lived and studied, there are a collection of valuable carpets, art and books as well as boards explaining Sufi history and culture.

We walked through the central shopping area, of course filled with a range of handmade carpets, traditional Turkish crafts and souvenirs, then reached Alaadin hill. Sitting at the top is the oldest known Seljuk mosque in Turkey and was part of the old palace that used to sit on the mount. The peaceful arched interior was such a contrast to the busy market streets we had just wandered. Last stop before leaving was at Halk Etliekmek for some of the longest ‘pizza’ you will ever see! This is actually called pide which is a traditional Turkish pizza always shaped in an oval, but this was an extreme version stretching the length of a 1 and a half metre slab of wood. We received a table right by the kitchen so could watch the talented chefs prepare and cook these huge Turkish pizza’s in their giant oven. Watching them carry them around the restaurant avoiding hitting people was entertaining too! When we got ours, a cheese and spinach version, it tasted just as good as it looked. The crispy base was perfectly cooked and the topping full of flavour.

A 1 night stay was more than enough to see the main sights, though the incredible history and spiritual feel of this city could be explored more. A 4 hour coach journey was our next stop taking us north to the Turkish capital, Ankara!
Check out my other posts from Turkey

Antalya – Paradise on the Turquoise coast

Cappadocia – A mysterious and magical land